The realization of an an enhanced state of mental clarity is a goal of both philosophy and hypnosis. And before hypnotherapy can be successful in producing subconscious mental clarity it may first be necessary to achieve better conscious clarity. My approach to achieving better conscious mental clarity is the practical application of philosophical method. Philosophical techniques are to some extent used in the “pre-talk” or interview phase before the start of my hypnotic sessions, but sessions devoted expressly to philosophical counseling are also available and can range from general philosophical discussions to consultations aimed at addressing particular concerns, confusions or angst that may interfere with the client’s general state of happiness. I also moderate a philosophy discussions group on an ongoing basis.

While I subscribe to the characterization by Gerd Achenbach–who started the modern philosophical counseling movement when he opened his practice in Germany in 1981–that philosophical counseling is “therapy for the sane” I consider this characterization hyperbolic and should be used only for rhetorical effect because psychotherapy, in many of its forms, is most typically used in conjuntion with patients and clients who are most certainly far from being “insane,” which is an awful word anyway that ought to be reserved for persons suffering from very extreme types of psychological disorder in which their contact with reality and functional existence in it is severely impaired. The phrase “therapy for the sane” should be interpreted more for affect: the real goal of philosophical counseling is to assist clients to obtain mental clarity and personal empowerment, in part by using the context and backdrop of broader philosophical perspectives.

My orientation towards philosophy is pluralistic and multi – perspectival; 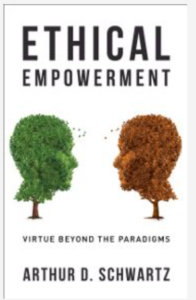 a comprehensive presentations of my views is contained in Ethical Empowerment Virtue Beyond the Paradigms (2014). Perspectivism provides a dynamic point of interconnection with the use of “reframing” in hypnotherapy which was first developed by the renowned psychiatrist and hypnotherapist, Milton Erickson. A philosophical example of reframing is provided by Anthony Robbins in Unlimited Power, in which he recounts the story of an army general who told his troops who were under heavy attack by the enemy that “We’re not retreating, we’re just advancing in another direction.” (from Anthony Robbins, Unlimited Power: The New Science of Personal Achievement, Simon and Schuster, 1986, p.257). If the general simply said that he is retreating he would have signaled to his troops, as well as send an internal message to his own psyche that his army had been defeated, but by reframing the event he put the entire episode in a more positive perspective that provided both motivation and hope that victory was still attainable. The fact that the army is in retreat is not changed by the reframing, but it does powerfully alter its meaning. Philosophy has been described as the pursuit of meaning, and the general’s reframing of the situation is an example of finding positive new meaning in an otherwise negative situation. I prefer to think of philosophy as the search for rational perspective. And if philosophy is the search for rational perspective then the general was also a philosopher.

Alongside the art of reframing, the traditional philosophic art of dialogue remains a paramount tool of philosophical counseling. Plato’s Dialogues, for many, remain as the most vivid representation of the nature of philosophical discourse. In truth (from my perspective) this is a false impression. Dialogue is essential, but Plato’s Dialogues and the Socratic Method which they exemplify demonstrate the legalistic process of “leading the witness” forcing a necessary conclusion that is based upon the contrived nature of the argumentation and the definitions that unfold in its course. The rigidity of the old philosophy has been greatly loosened by the development of pragmatism and the general movement in the twentieth century towards non-absolutist and relativistic frames of reference. That those like myself who have been influenced by these philosophical movements reject absolute definitions and moral rules existing outside of contextual reality does not mean that we reject truth or morality. But definitions and rules are, in the final analysis, only guideposts which while valuable are always subject to revision. The rejection of categorical thinking means that greater understanding of nuance and the subtleties of wisdom are required. Certainly, there is no more powerful tool to help achieve greater understanding than the fine art of dialogue.

The form of dialogue that I favor steers away from the character of the debating society that Plato’s Dialogues sometimes seem to suggest, and maximizes the establishment of rapport and the fostering of a multi-perspectival understanding of the philosophical issues involved. Certainly, the less polemical approach is more suitable for philosophical counseling. The ebb and flow of the Tao, enabling and empowering both sides of a philosophical argument so that each better understands the other is in harmony with the pluralistic and multi-perspectival point of view, which values as many positions as possible so that reframing and the application of other techniques may facilitate the emergence of new and more persuasive perspectives. While dialogue is not ego-less, developing the capacity to understand the other side and to discover new and challenging points of view requires a lessening of egoistic interference. But Open Dialogue is more illusive than Socratic Method, and the Truth or Good may not be viewed as taking the form of an eternal and unchanging ideal. The Open Dialogue is as well-suited for this task as any method of philosophy, but we must be eager to use all methods that are at our disposal.

Philosophical counseling is well-suited for individuals who find that questions are themselves an integral part of the solution. Sometimes a question posed as the answer to a question can be downright annoying, but in philosophy the freedom to question can sometimes be the best therapy.