Combining the power of hypnosis and the wisdom of philosophy

Hypnotherapy, or the therapeutic application of hypnosis, is a powerful tool for self-empowerment. By eliminating barriers or blockages between the conscious mind and the subconscious mind, hypnosis can help unleash positive potential. Bad habits can be broken and new patterns of thought and behavior can be achieved when self-limiting fears, false conceptions, and troubling confusions are resolved. Some people falsely think of hypnosis or hypnotism as being something mysterious, as if it were magic. In fact, hypnosis is the induction of a state of mind that is similar to daydream reveries or the moments just before drifting off to sleep. We are conveniently located next-door to Boston in Newton, MA near the Mass Pike and Route 128.
The major difference between everday trance states and hypnosis per se as practiced by a hypnotist or hypnotherapist is that its induction is intentinal. Hypnosis is not only not a state of unconsciousness, it is a state of highly focused consciousness. Through the use of suggestion and the cooperation between the hypnotist or hypnotherapist and client, the subject first enters into a state of profound physical relaxation and then into a relaxation of the mind that is at the same time highly focused. This combination of physical relaxation and relaxed mental focus creates a state of optimum suggestibility which makes the therapeutic usefulness of hypnosis possible. The uses of hypnotherapy include weight-loss and weight management, smoking cessation, improved motivation and self-esteem, improved creativity through the unblocking of creative potential, stress reduction and stress management, control of anxieties and phobias such as public speaking, stage fright, airplane or flight anxiety (fear of flying), test anxiety. Any type of anxiety or phobia including anxieties which cause insomnia or interfere with sleep. Anxiety concerning dating and forming healthy relationships. Memory enhancement, enhanced sports performance and performance enhancement of all kinds; listen to this radio interview on golf and hypnosis (WBZ-FM, Boston) hosted by Hardy. Hypnosis and hypnotherapy can help with academic testing and/or exam preparation. All kinds of performance anxiety can be helped by hypnotherapy. Hypnosis can also help alleviate anxiety concerning surgery, fear of needles, dental visits and other medical examinations and procedures including childbirth. The management of addictive behaviors is one of the many other useful applications of hypnosis. Hypnosis plus positive thinking equals change.

Old habits and behaviors are not easily changed, but hypnosis is an empowering tool that makes changing bad habits easier. Along with habits of good driving and good speech, or good dispositions such as calmness in moments of difficulty or crisis, there are the reverse bad habits and dispositions. There are the habits of overeating, poor eating, and smoking. Cigarette smokers and tobacco users who make the wise choice to quit have habits based on both behavioral (or pyschological) as well as physical (or chemical) factors. There are irrational fears of crowds or of speaking before groups. There are the array of anxieties in response to different types of stressful situations such as those relating to your business or job, nervousness about taking tests or examinations of all sorts. We may tell ourselves over and over again to relax, that our fears are irrational, that we should quit smoking or stop eating so much, etc. and yet our minds may not want to listen. We need to move beyond the status quo. Hypnosis and hypnotherapy can help!

For hypnotherapy to be successful a client must want to change. Positive changes through hypnotherapy result from the harmonious cooperation between the conscious and subconscious minds and can sometimes can seem natural and easy. For example, losing weight through hypnosis and hypnotherapy is very different than conventional dieting. To make a bold metaphor, dieting is akin to war, whereas weight control through hypnosis is the waging of peace between conscious choices and subconscious cravings. The positive change from negative eating habits to healthful and sensible patterns of eating in order to lose weight and keep it off, when done through a program of hypnotherapy, is a wonderfully natural experience compared with the experiences of most dieters. Much the same comparison may be made between conventional stop smoking programs and hypnotherapy. List of Services Page.

While the discipline and practice of philosophy are important elements in my work, my sessions are not discussions about the great philosophers like Plato, Aristotle or Nietzsche, unless that’s what you want! The underlying themes and approaches of philosophical reasoning may not even be named in discussions, but their goals are universal: better self-understanding and mental clarity that break through mental barriers, bad habits, negative thinking and all barricades that hold us back. The result of this process is greater personal freedom and self-overcoming. It may be fairly said that this is a description of your authentic self.

There is a natural boundary of sorts between the conscious and subconscious minds, but they can clash and can become complex. What happens when inadequately analyzed belief conflicts with positive change? The philosophical enterprise of resolving and dissolving confusion is highly complementary with hypnotherapy. Pragmatism and analytic philosophy, as well as other philosophical disciplines, help work through intellectual and philosophical confusion. Greater conceptual clarity is then reinforced during the hypnotic session, in which philosophic and hypnotic technique merge.

Hypnosis is itself a very Tao-like process. Taoism provides a nearly perfect metaphor for hypnosis. Hypnosis is a sort of non-doing that contains the germ of great change and self-realization. Hypnosis is sometimes described as “allowing oneself to go with the flow.” It is a nearly perfect description of living in the Tao! But, of course, there are many philosophical traditions and practices, and by my remark about Taoism we get to what is perhaps my most basic principle of philosophy. During the course of writing for my book, Ethical Empowerment: Virtue Beyond the Paradigms, I developed a term called “plural perspectivism.” In a nutshell, the term combines the term ‘perspectivism’ that emphasizes the uniqueness of one’s own truth or perspective, with ‘pluralism’ that respects or least tolerates a universe of perspectives. Plural perspectivism eagerly invites the examination of a multitude of perspectives that, actually, facilitates consensus and reconciliation because each perspective may be entertained without dogma or rigid ideology. In the technique of “reframing,” pioneered by the great psychiatrist and hypnotherapist Milton Erickson, hypnotherapy has its own version of perspectivism. Erickson would talk to his patients and put things in a different frame of reference with remarkable skill and success. Probably the simplest and most common example of this is “Is the glass half full or half empty?” It’s pretty simple, but the outcome of the perspective can make a world of difference. So, back to Taoism: it is only one type or philosophical perspective, and in my hypnotherapy and philosophical counseling practice we use reframing or find philosophic perspectives when appropriate. 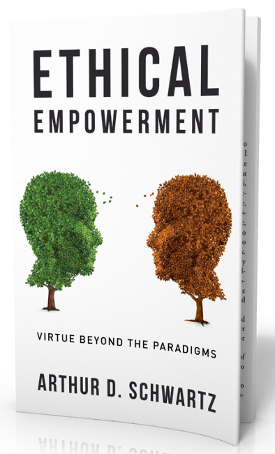 Ethical Empowerment was originally conceived in the form of a hypnotic metaphor, as reflected in the section “hypnotic thinking,” in which hardened thinking, preconceived concepts, dogma and ideology are discussed. There is no question that much of our conscious lives are left relatively unexamined. Lessons learned and absorbed through cultural, political, educational, media and many other influences tend, for the most part, to be unquestioned. Socrates’, “The unexamined life is not worth living” is one of the most fundamental roles of philosophy because it can help us to snap out of “trances” so deep that the questioning, reflection and examination of our ethics become blocked by moral blindness. The arguments in Ethical Empowerment are often unorthodox and highly controversial, but its principal intent is not the promotion of any particular political or social agenda but, rather, a philosophical interest in opening minds to the reexamination of preconceived beliefs and concepts. But an open mind may accept or reject radical or progressive ideas as much as ideas thought of as traditional or conservative.

There is a consensus that a positive mental attitude powerfully supports both healing and disease prevention. Hypnosis goes further. The positive thinking that is conducive to hypnotherapy can, in the hypnotic process, powerfully communicate subconscious suggestion in the form of visualization, affirmation, and deep emotional healing.

Hypnotherapy and the therapeutic use of hypnosis is a holistic and complementary method of pain management and wellness. I work in conjunction with other Greater Boston area health care practitioners to utilize hypnosis in a manner that complements and supports ongoing treatment and healthy lifestyle changes.

Corporate and organizational group sessions are available for weight reduction, smoking cessation, motivation for exercise and general wellness. Motivation, creativity and peak performance are also prime areas of focus. Seminars may include both group hypnosis and philosophically oriented discussions intened to inspire, motivate, and clear the muddles and conflicts that can interefere with the wellness of both the individual and the organization as a whole! Please click here for more information.

The focus of the PHILOSOPHY IN THE NOW group is both on the perennial topics of philosophy, as well as on modern philosophic perspectives. Philosophy can enrich  understanding of the Now! Philosophy in the Now guards against philosophical traps of dogmatism and rigid ideology. The old and the new have their wisdom. And they can be tools to usher in the future! (continue reading)